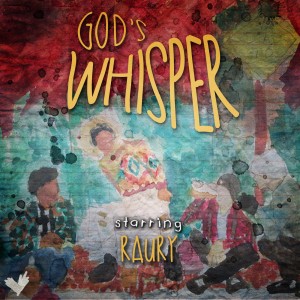 Music sets the mood in just about every situation and it can certainly set the tone for a yoga class. There are as many ways to use music in a yoga class as there are asanas to warm up, build heat, cool down and end in Savasana. The choice to use music ranges from providing background sound to fill in or cover up the sound of heavy breathing, feet slapping the mat, or the sound of puffing and groaning. But music can also begin to move practitioners from posture to posture, touching personal chords that may involve a history with a particular song or a syncopation that rings with emotional frequency.

For yoga practice, my personal preference is to choose a playlist that moves along the lines of the classic yoga class structure starting with centering on the mat. For the playlist below I start the class with the magical, ice-tinkling sound from Bjork. “Frosti” is like a switched on version of the miniature child’s piano. We then move on to ambient house music and then “Strange Overtones” by David Byrne, taking the class into the first stages of warming up. By the time the class is into 16 or 17 minutes it seems just right to rip into Led Zepplein’s “Ramble On” as we begin moving the body into a spiraling, kundalini awakening. Hands clasped overhead, tracing the ceiling with circles and rotating the hips into a first chakra wake up call. Toning it down a bit, after all THAT excitement we move onto “The Seven Souls,” a far out rendition by Material that mashes up the unlikely combination of spoken word by William S. Burroughs and The Notorious B.I.G. backup singers doing the chorus “God save our souls…” At this point we’re a mere 30 minutes into class as Raury, the amazing 18 year old Indigo child from Atlanta sings “God’s Whisper.” Oh, my.

From here, it’s the Black Keys, Kailasa, music from Mali, a touch of Alicia Keys, some melodic Storyhill, back to some ambient chill stuff from Paul Van Dyk, some mystical, groovy Stoppa & Nobby and then grounding down/winding down the class with yoga’s anti-message from Orbital, “Attached.” The whole thing wraps up to a fine finish with Suphala in KCRW’s Jason Bentley remixing of something he calls “Piscean Dreamer.” And it’s off to Savasana we go!

Here’s the playlist. Be sure to check out the links below to sound versions of all of these songs.

If you’d like to sample some of these tracks, listen to them here on soundcloud and youtube (many of these are remixes, personal renditions by fans and are a bit different than the originals, but you’ll get the drift!):

Music credits go to all the artists mentioned in this post. I have purchased each and every one of these songs, along with thousands of other recordings by these artists and others that I have in my personal music collection. I recommend that you support musical artists by actually buying their music, talking about their music with your friends and supporting local and international musicians by going to their concerts and purchasing their music. Music makes a difference!

Music is not a necessary element to the practice of yoga. Sometimes music in a yoga class can be distracting in that it is annoying or even worse, if it is so good that you find yourself listening to the music instead of your breath! Whatever the circumstance, music has a way of tapping into our senses and into our emotions. Most everyone has had a profound experience with music through its effect on mood and emotion. Right now you are probably recalling hearing a song that made you incredibly sad, one that kept playing over and over in your mind, a catchy melody that you found yourself humming at some random moment, a song that went perfectly with a ride along the ocean or one that made you jump to your feet to get out on the dance floor.

So it is with care that music for the yoga class is selected carefully. Some yoga teachers play ambient music at a real low volume to act as a soft buffer, others like to play popular or rock music to lighten the spirit and enliven the energy. For me, I gravitate toward music that sets me in mind of the ancient wisdom of yoga. I also like to time my music to start off slow and contemplative, building to high energy and then coming down to a cooling, soothing musical space to carry the class to Savasana. I like an element of surprise in the musical selections, choosing eclectic sources that one might not consider for yoga.

I’d like to share a dozen of my yoga class playlists. Check these out on iTunes or SoundCloud and use them in your own practice. Or, come on over to the Take Me To The River Yoga studio for class and hear them first hand! 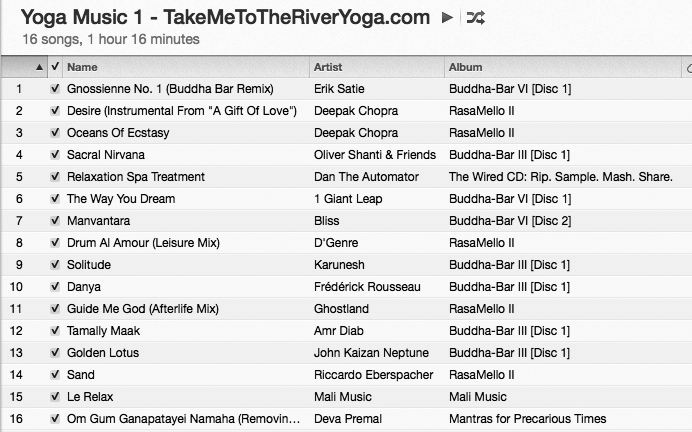 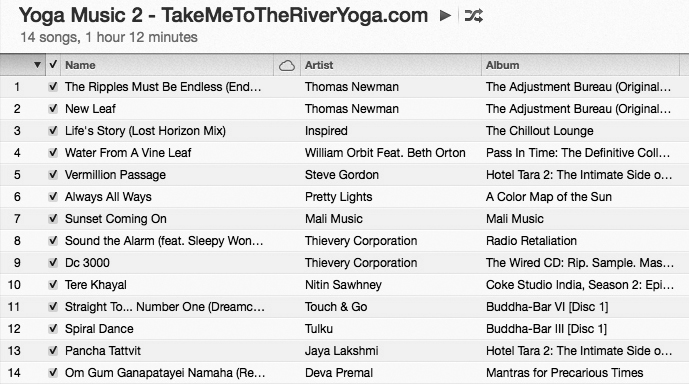 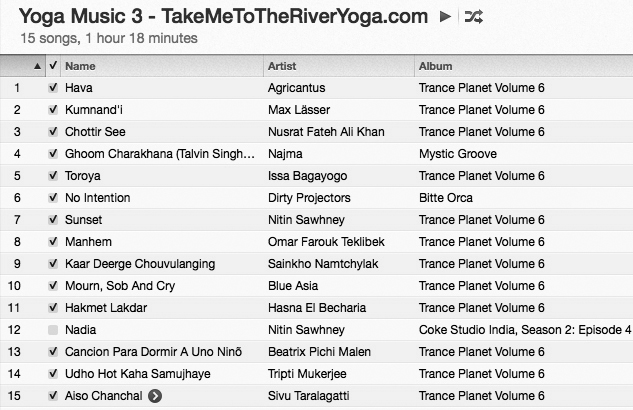 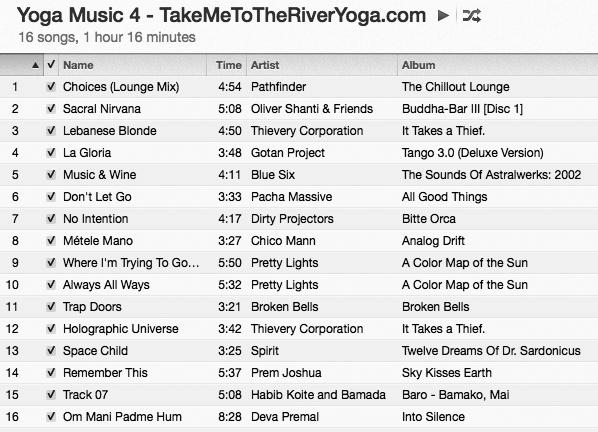 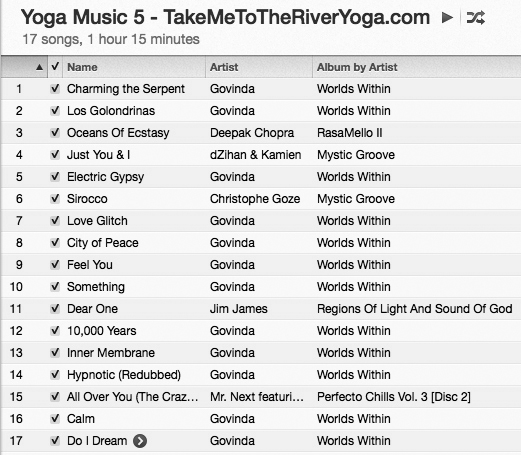 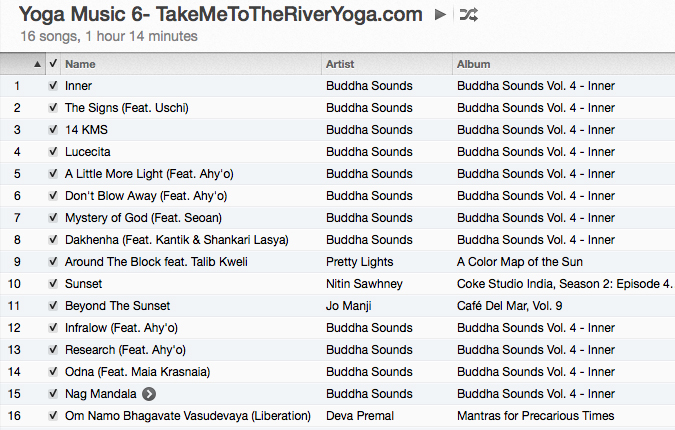 The Kripalu Yoga and Ayurveda Association (KYAA) is an organization for yoga teachers and Ayurvedic health counselors to share the knowledge and benefits of yoga and Ayurveda. KYAA inspires teachers by providing a sense of community and connection.